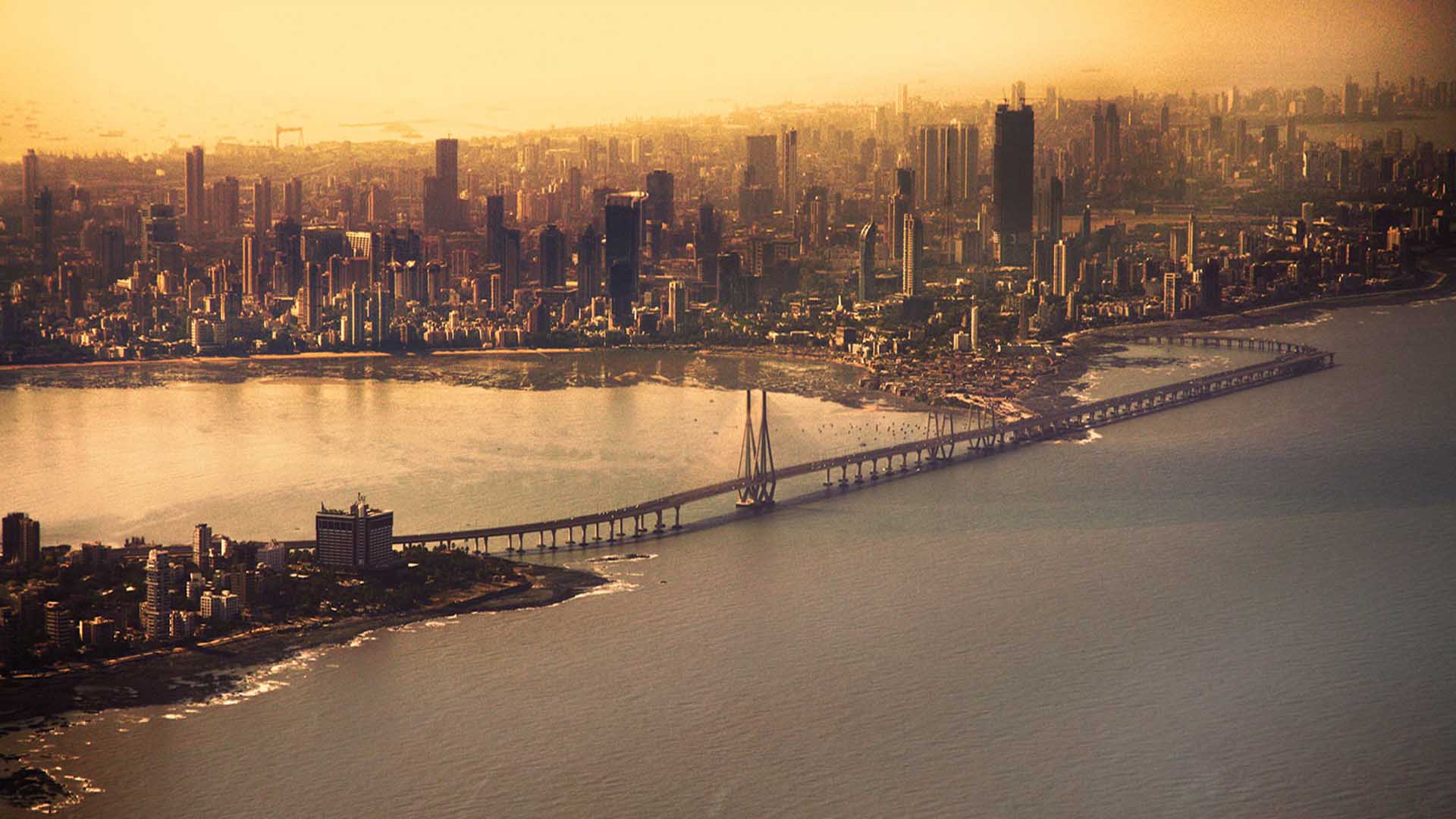 Glorious
History of a
Pioneer.

It was the year 1975, when Nanik Rupani, an enterprising and successful businessman set up Roopmeck Enterprises, a trading firm dealing in the distribution of electrical cables, motors, switch gear, circuit breakers, energy saving devices and other industrial electrical items required by Industry. Under the visionary zeal of an inspired entrepreneur, Roopmeck soon achieved enviable success in the field. The company ventured into business expansion and thus, in 1984, Roopmeck Enterprises became Roopmeck Electricals Private Limited.

The company had a larger agenda which comprised of not just supplying industrial electrical items to top notch MNCs and PSUs but also advising them on various state of the art power saving equipment and processes. 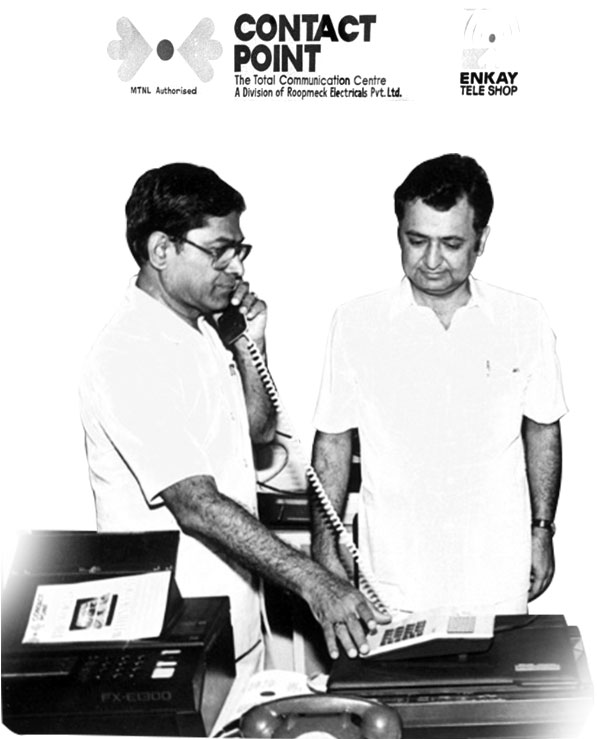 Soon, Roopmeck Electricals Pvt. Ltd. became a well known name in industrial electricals and its services were sought after by a large section of industrial clientele. Many leading electrical giants such as GEC, Siemens, English Electric, Philips and Crompton Greaves became its Principals offering a host of products and services ranging from lighting and power saving equipment to complete power saving solutions, which enabled corporate houses, MNCs and PSUs to reduce their lighting and energy costs substantially.

Roopmeck was also amongst the first few companies to advertise on Doordarshan, then, the only TV Network in the country. 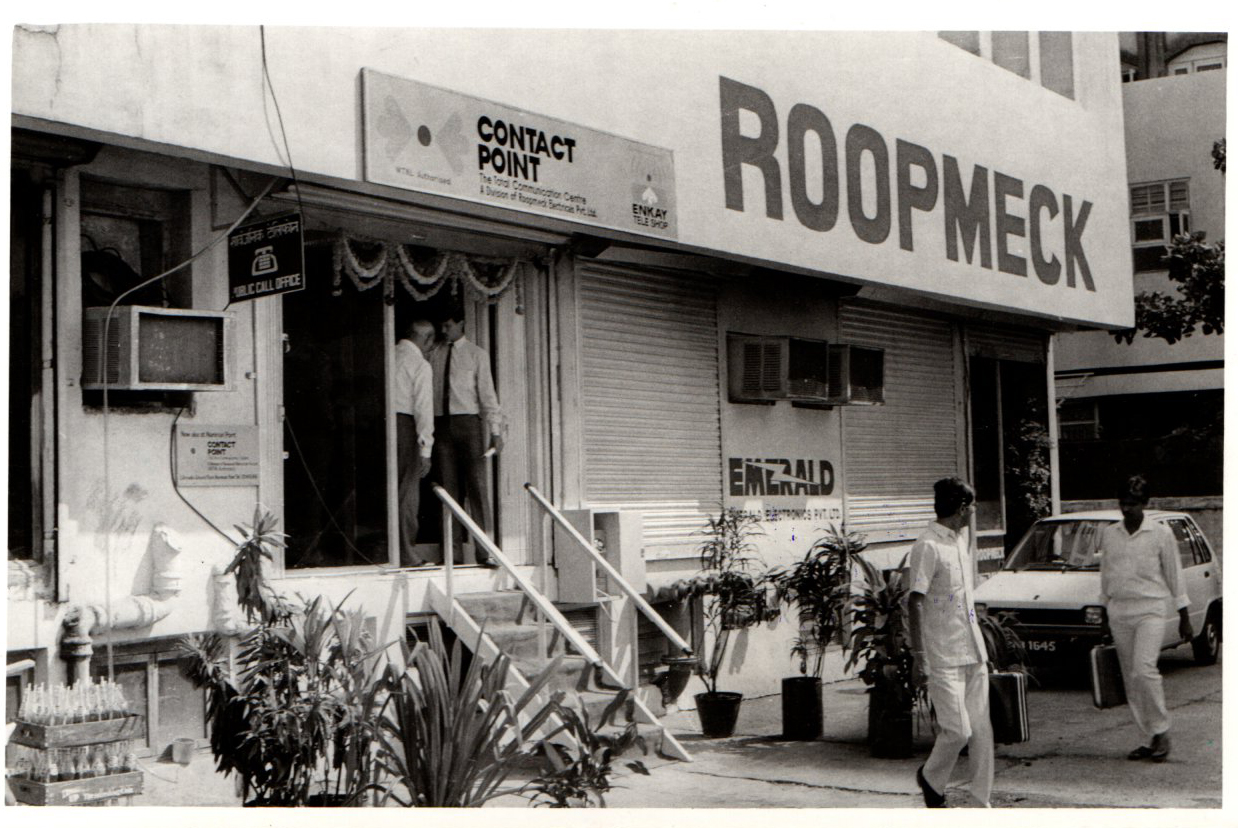 Always looking to new pastures for growth, Roopmeck became the first private player to make an entry into the then fledgling telecom sector by tying up with MTNL and offering various telecom services through their complete communication center known as Contact Point, which offered Fax, STD and ISD facilities.

Thousands of such communication centers were set up in association with MTNL and BSNL, even in the remotest parts of the country, creating millions of jobs in the Telecom sector and generating billions of dollars in revenue for both MTNL and BSNL.

These facilities were a boon not only to the small trader and entrepreneurs but also to the common man. The messaging service provided by these communication centers benefitted even the labor class by making them accessible and increasing their income substantially.

All this became possible through the efforts of Roopmeck, as, at that time there was no clear policy for private players in telecom sector. This was later introduced after Roopmeck forayed into the sector. 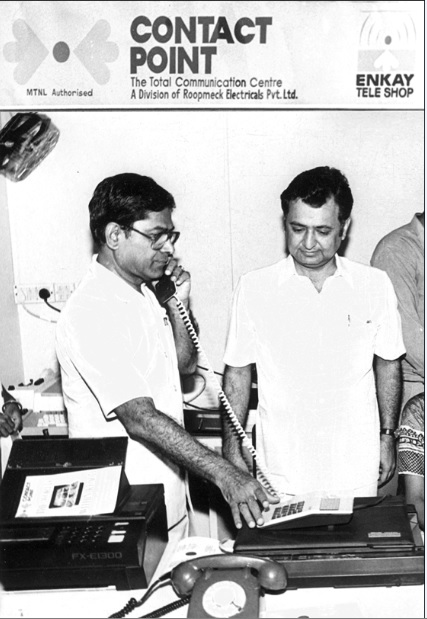 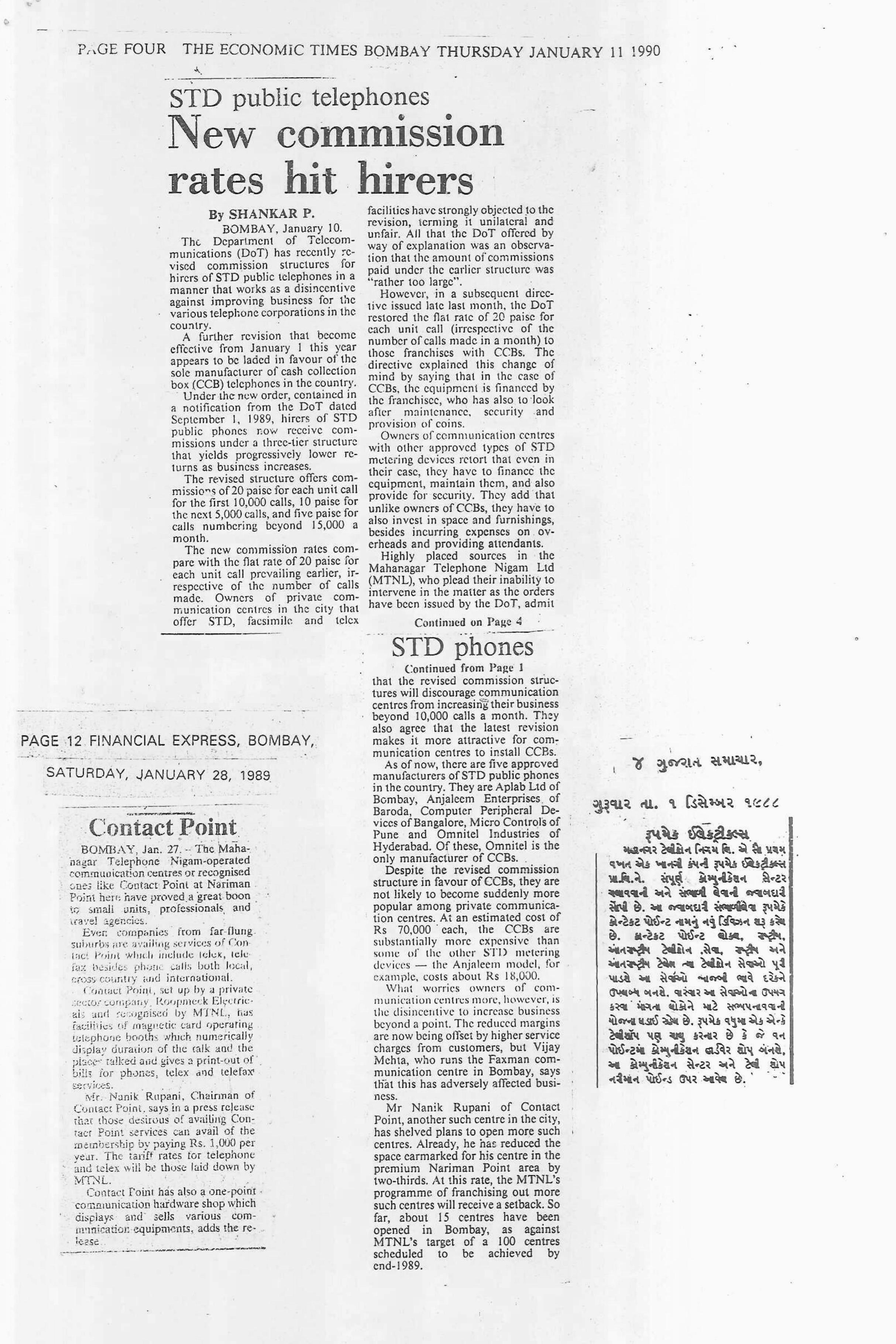 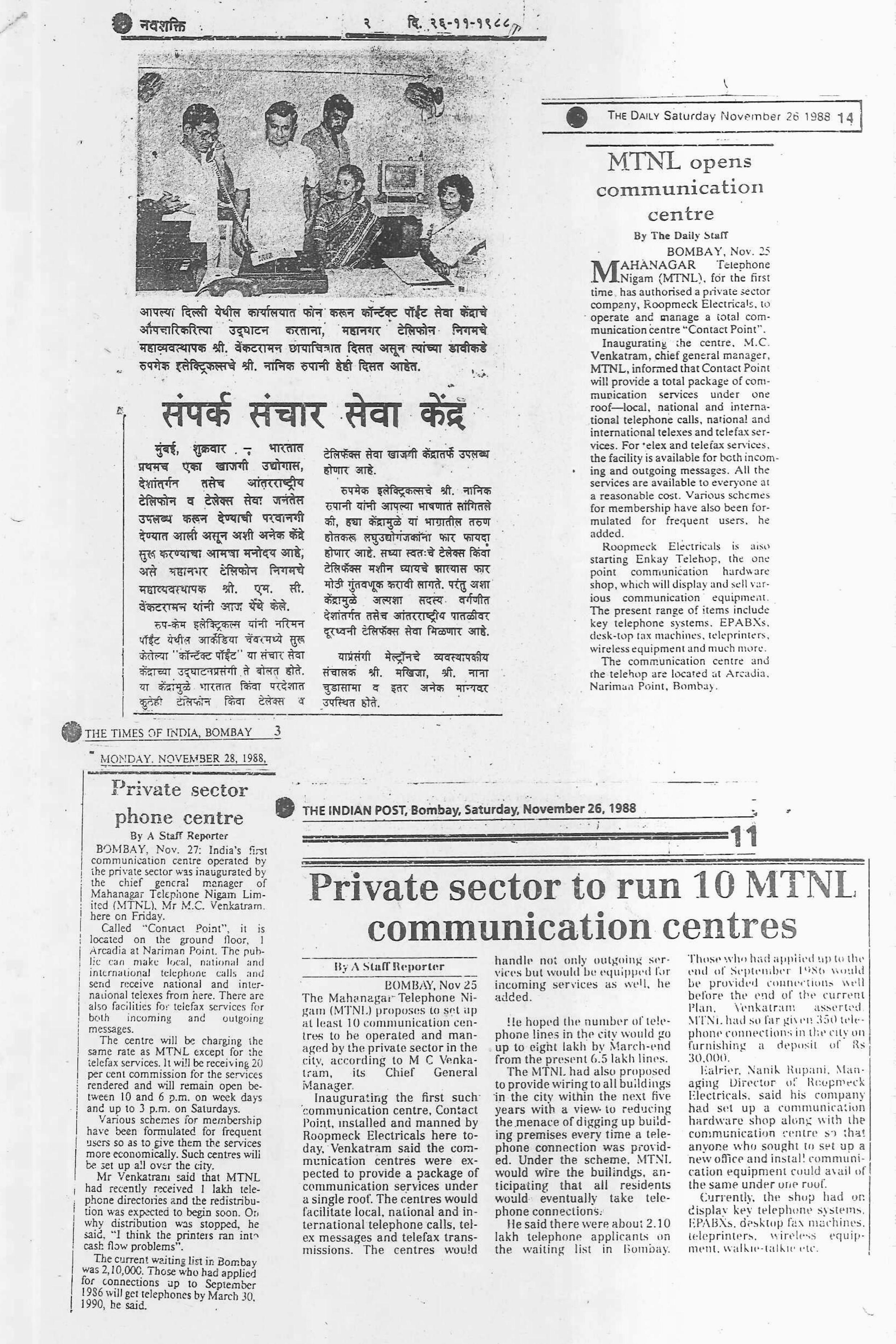 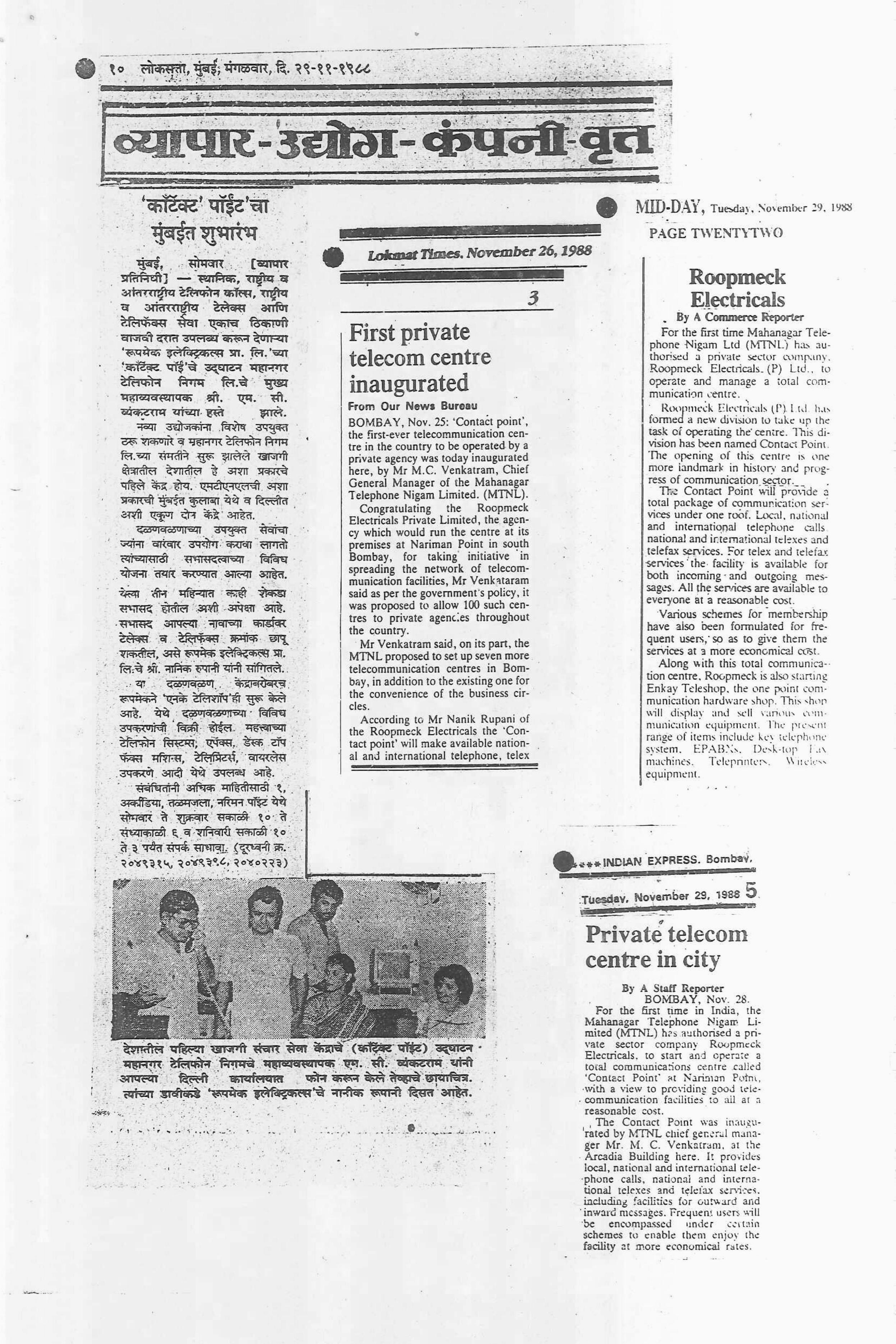 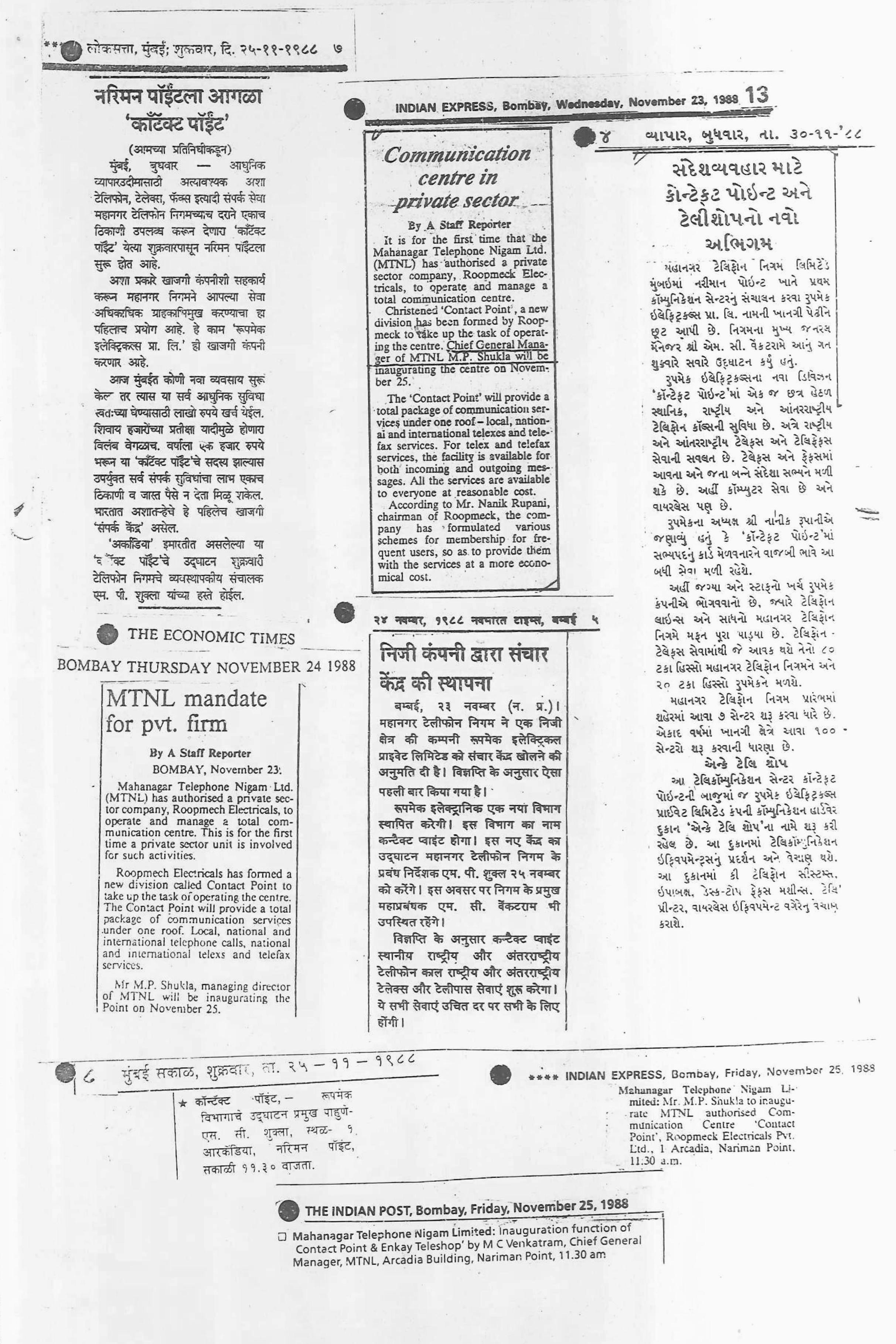 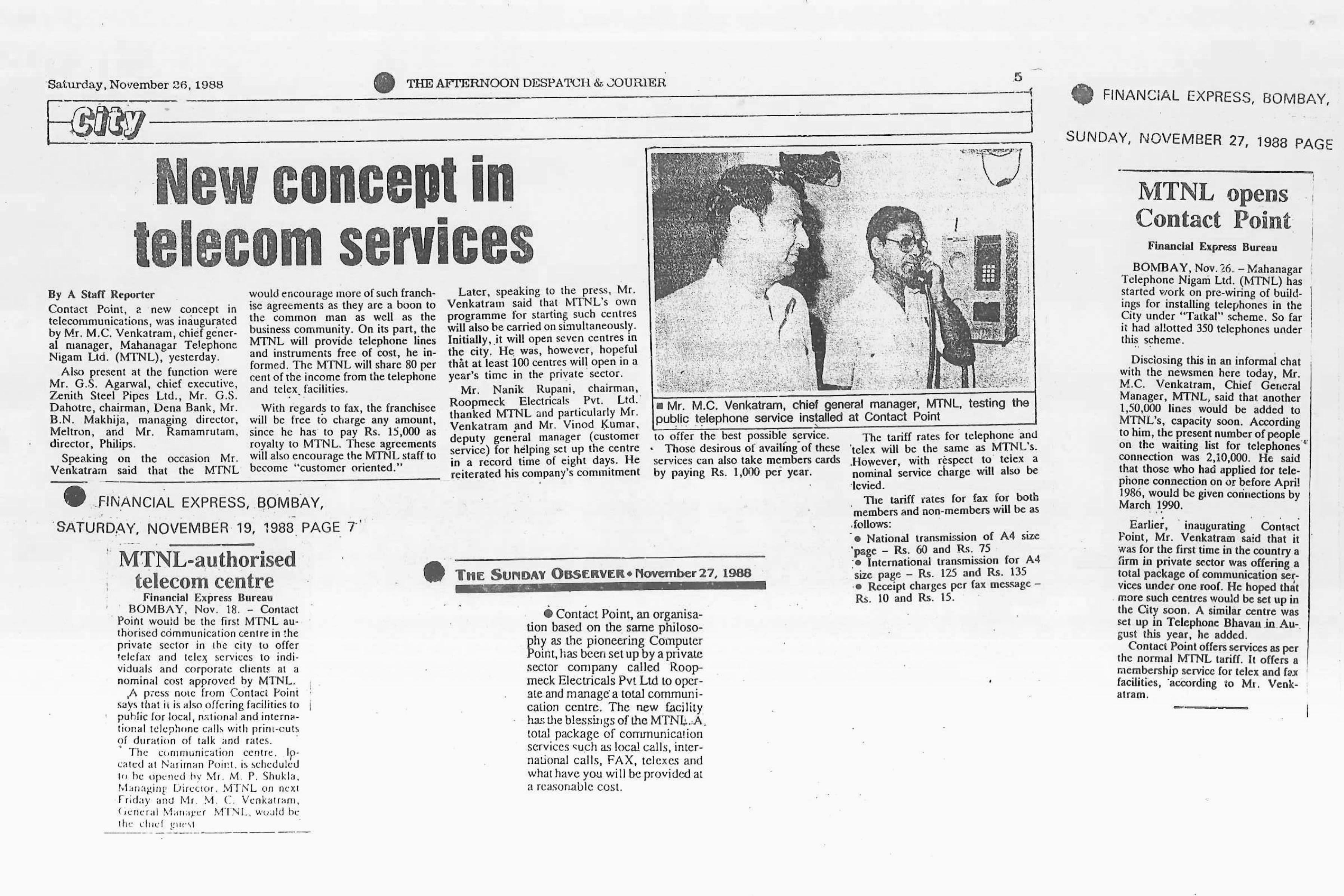 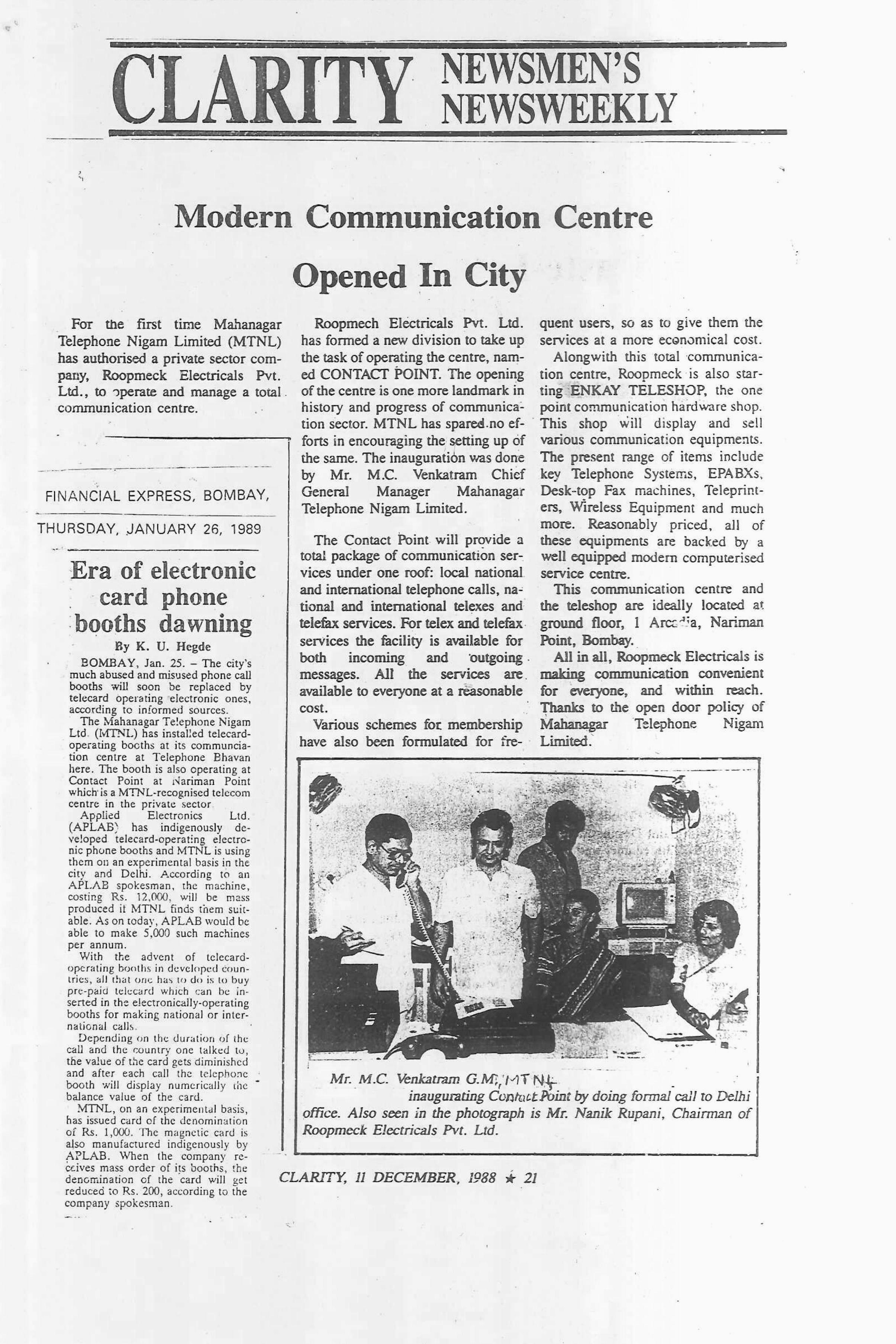 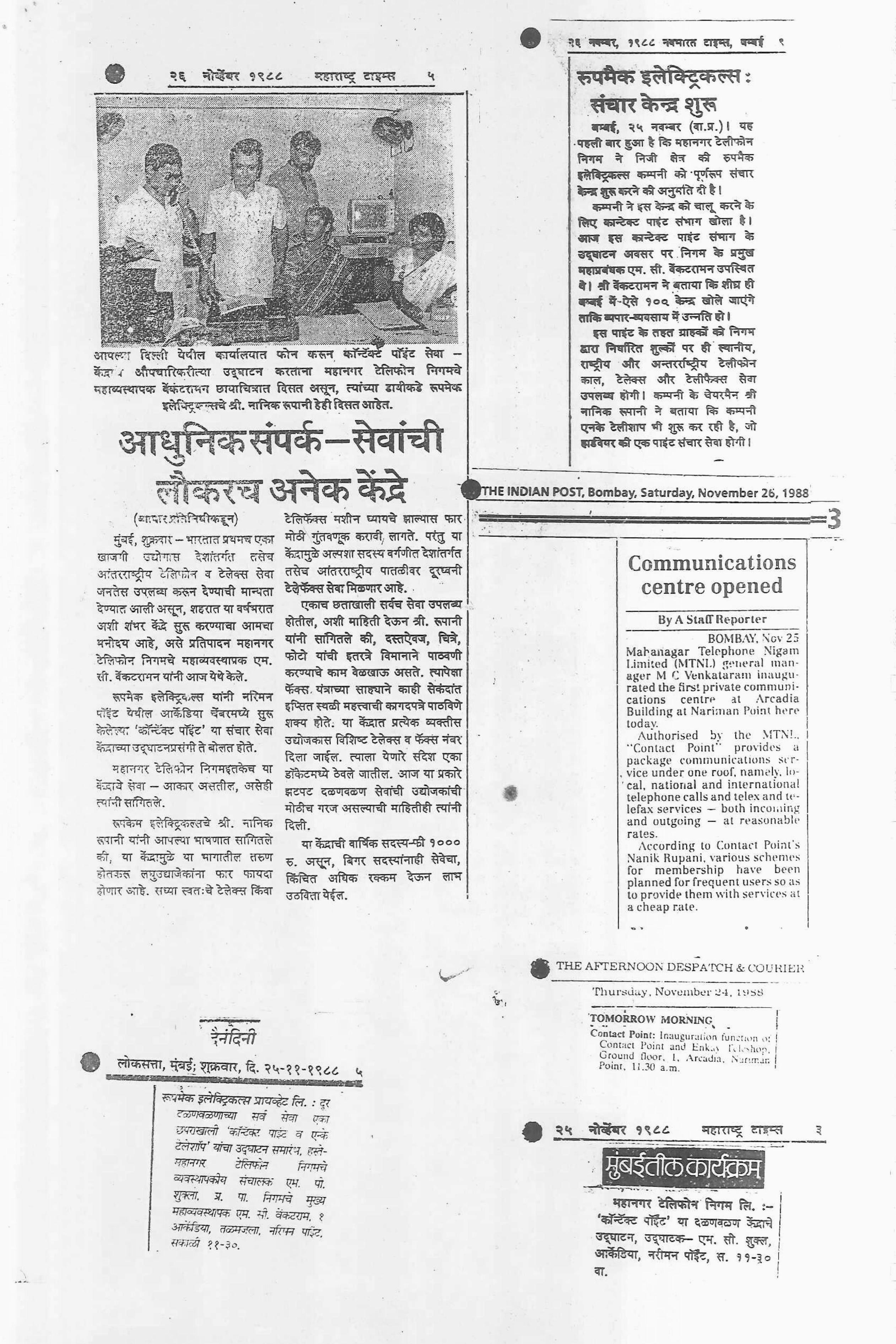 Further, Roopmeck became a game changer in the telecom sector when its sister concerns Enkay Telecommunication Systems Pvt. Ltd. and Neutron Electronic Systems Pvt. Ltd. tied up with the Maharashtra government owned Meltron – leading supplier of key telephone systems. The reach of both Enkay and Meltron was such that they captured 70 % market share in smaller key telephone systems.

These systems were installed not only in corporate houses but also in the Rashtrapati Bhawan, PM’s residence and the residences of various Chief Ministers, Governors and Bureaucrats both at the Central and State government levels.

Another feather in the cap was the introduction of Video conferencing by Neutron for the first time in the country. Its presentation was given at Parliament House to Mr. Shivraj Patil, then Speaker of the Lok Sabha and Mr. L. K. Advani, leader of the Opposition at our offices in Delhi.

Collaboration with a
Japanese Gaint.

Enkay had become such a prestigious name in India that Nitsuko– a subsidiary of the world renowned NEC joined hands with it for the sale of its key telephone systems and later, even other products of the Japanese giant, NEC were sold by Enkay and serviced by Neutron.

Another notable tie-up of Enkay, the then sister concern of Roopmeck, was in 1993 with Adino Telecom Pvt. Ltd., a company promoted by Mr. Gulu Mirchandani and Mr. Vijay Mansukhani of Onida.

Adino was founded under the Chairmanship of Nanik Rupani and pioneered the 2 way radio communication system. These 2 way radio systems were used by various police departments across the country as well as BSF. Not just that, Adino became a distributor of prestigious brand names such as Motorola and other Companies for the supply of complex wireless equipment to the police departments.

On The Growth
Trajectory.

Since Nanik Rupani was President of Indian Merchants’ Chamber in 2004-2005, and Vice Chairman of the National Executive Committee (Western Region) of FICCI, he had the opportunity to interact with leading luminaries of various companies in the corporate arena. He was held in high esteem and elected Chairman, Telecom Committee of IMC which organized telecom conferences annually and which were attended by many international companies and representatives of international bodies such as ITU (an agency of United Nations).

The late Prime Minister, Rajiv Gandhi had set up Science and Technology cells, nationally and state wise. Nanik Rupani was Chairman of the MPCC cell for several years. In this capacity, he had the privilege of interacting with various Cabinet Ministers, State Ministers, as well as Mr. K. R. Narayanan, then Minister of Science and Technology who later became President of India, and India’s telecom revolution guru, Dr. Sam Pitroda.

As MPCC Chairman, Nanik Rupani organized seminars which became a yearly affair and were attended by notable personalities such as the late Pramod Mahajan, then Minister of Communications at the Centre and other telecom Secretaries and Bureaucrats.

To Nanik Rupani also goes the credit of organizing one of the biggest Asia Pacific Business Summit at Singapore in 2004 for harnessing global business opportunities. The objectives of this summit were to project India as an engine for growth in the region and to showcase the rich options available in the country. Almost 900 eminent delegates were in attendance from the world over and speakers included a multitude of prominent names, amongst them were leading economists, politicians and industrialists such as Mr. Srichand Hinduja, Harilelas of Hong Kong, Chairperson of the Times Group, Ms. Indu Jain, and Sri Sri Ravi Shankar to name a few.

As many as 75 leading personalities were invited from all over the world to address the conference and there were 4 parallel sessions being simultaneously conducted to accommodate the wide range of speakers and topics. Mr. Shivraj Patil, then Speaker of the Lok Sabha interacted with the delegates through Video-conferencing. 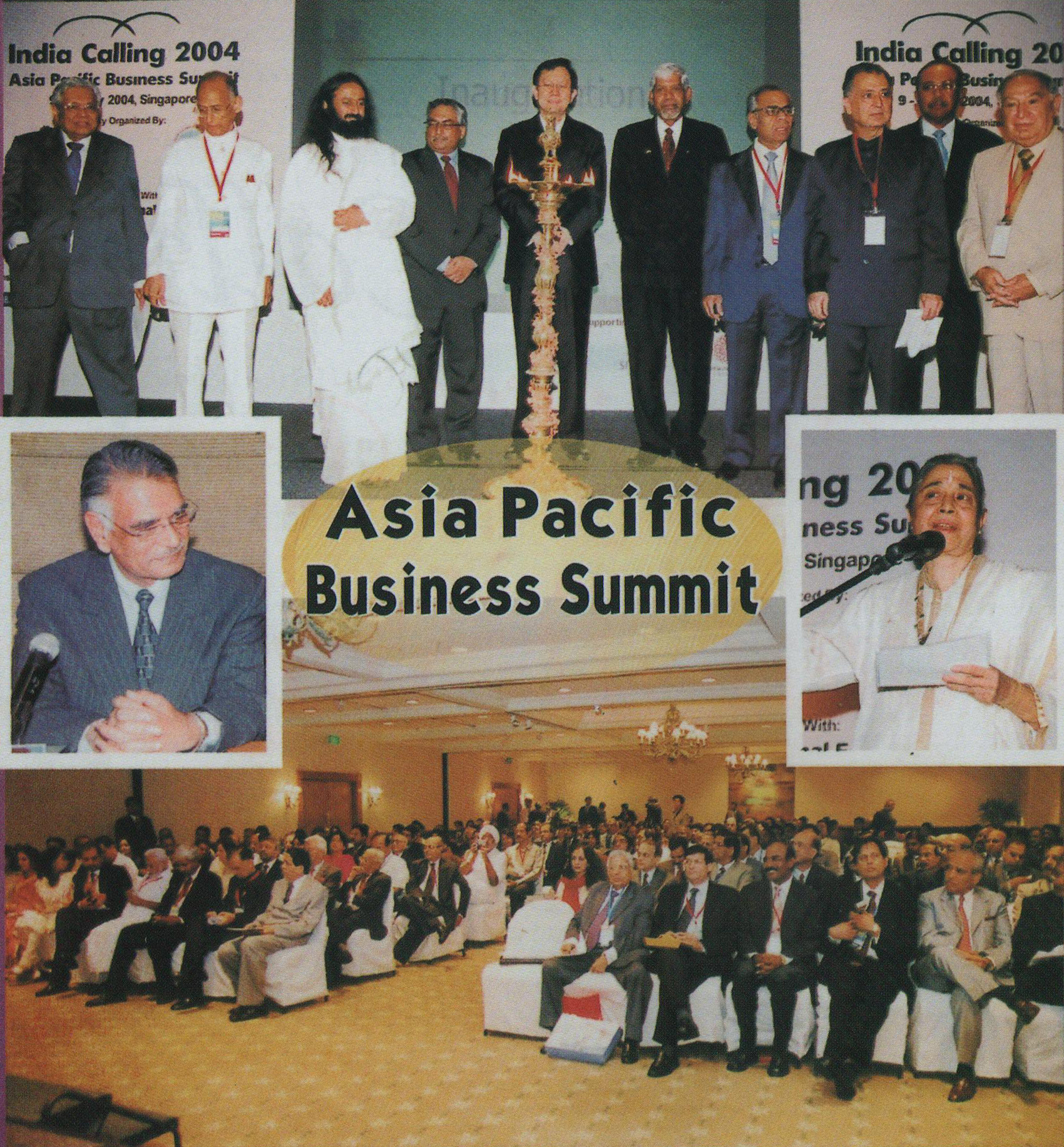 The guiding light for Roopmeck Electricals Pvt. Ltd. has been Nanik Rupani who has worked tirelessly to make it the monumental success story that it has become in the last four decades. Today it plays a role of guiding and advising corporate houses on their requirements in the vast field of electrical systems, energy saving devices and IT solutions – however complex they may be!

Belief in noble ideals and the birth of
Priyadarshni Academy.

Nanik Rupani has always been a staunch believer that one must repay to the Society at large for all the love and largesse it gives a man! It is this ideal that led him to launch Priyadarshni Academy in 1984.

As Chairman of this prestigious NGO, Nanik Rupani had the rare honor of addressing the Central Hall of Parliament, while presenting it with a life size portrait of the late Prime Minister, Shri Rajiv Gandhi. For more information on the Academy, please visit www.priyadarshniacademy.com